Our reader asked us a question. I faced a weird problem on my Samsung Galaxy J3 phone. I took cool photos and wanted them to sync to Google cloud to be able to share images with my partner.

Then, I connected to the Wi-Fi network, opened the Google Photos app and waited. But images din’t begin uploading. I saw the notification “Waiting for Wi-Fi. 2 photos left” despite my Galaxy phone is already connected to Wi-Fi.

There is another curious thing: I was outside and that’s why I was using another Android device in a Mobile Hotspot mode instead of connecting to an ordinary wireless router. Please, help me. How can I make my images won’t upload to the cloud? Thank you in advance. 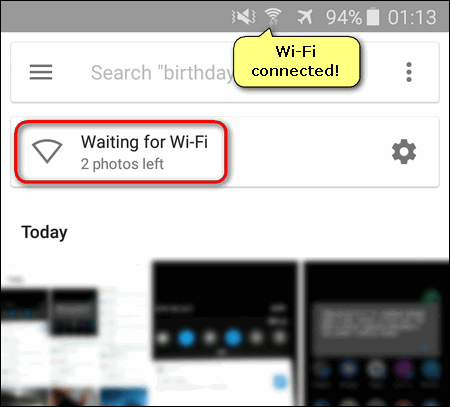 The culprit is the Mobile Hotspot feature on Android. Such type of connection is treated by your phone as a limited one and the sync won’t start to prevent traffic wasting. That’s why Google Photos says “Waiting for Wi-Fi” despite you are already connected to Wi-Fi.

Google Photos may start syncing your images as soon as you allow backing up photos over cellular data in its settings. Apparently, the portable access point is perceived as a limited Internet connection and Google Photos don’t start uploading images.

Thus, if you wish to sync your photos to Google Drive it is advised to do the following:

That’s all. We advise to turn the setting off again after you uploaded your content to prevent wasting your own mobile traffic.